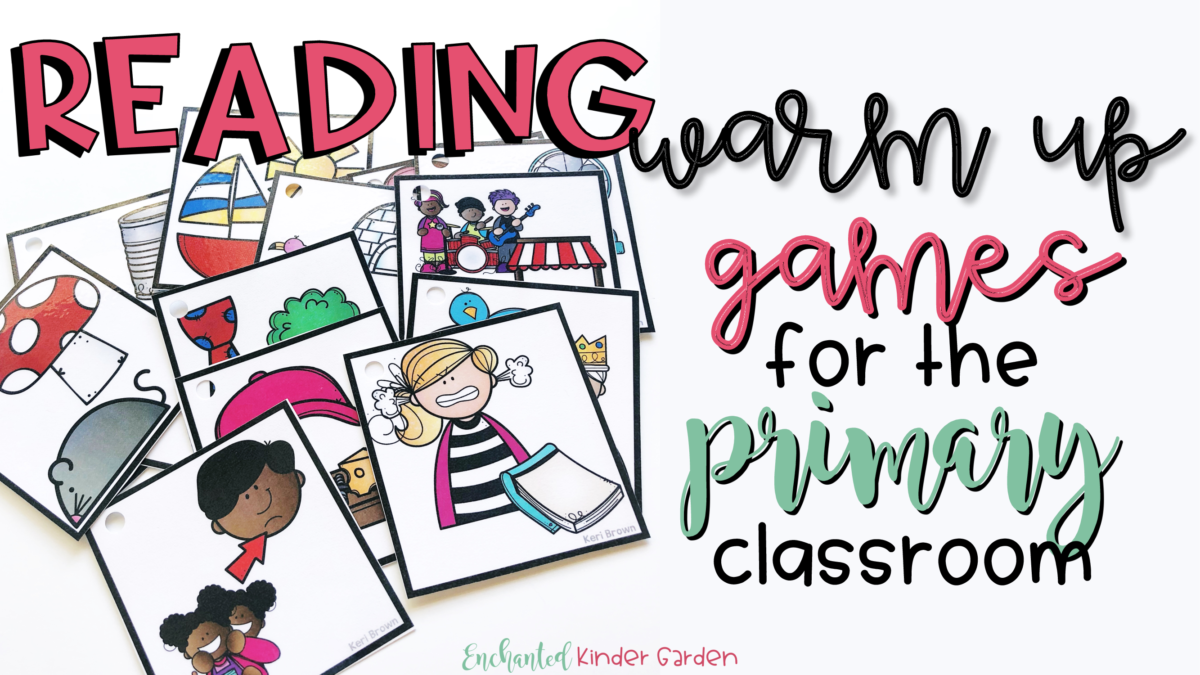 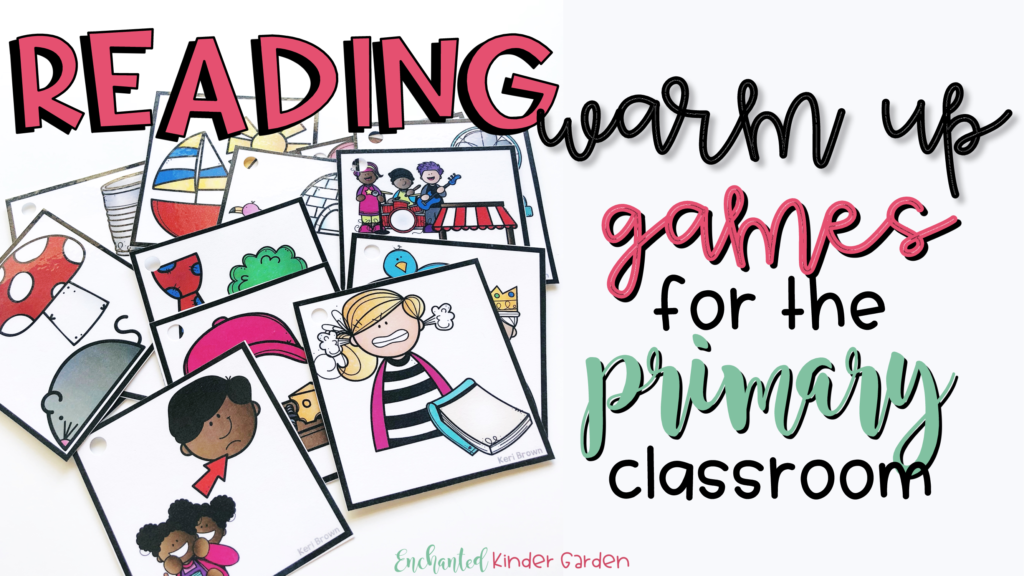 A warm-up game can be anything fun. During reading small group, I like to make sure my kids are having so much fun that they don’t realize they’re learning. They absolutely adore the time that they have with their group. Reading small group time is your students special time with the teacher and should be treated as such. Make sure that you are able to maximize their time with you. There should not be any downtime. A few of my favorite warm-ups are below. 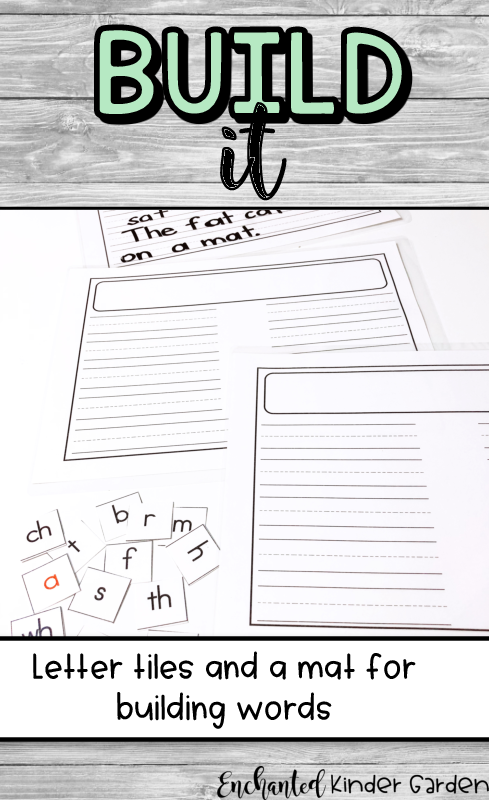 I say a word and they have to build it. I printed off some plain letters on cardstock (since they will be handled an awful lot) and laminated them. Then, I placed them inside these little cups. Depending on what each group is working on, I usually have different cups for each group. The beginning of the year, I am able to mostly use one set of cups since we’re working on the same skills. I house all of the letters right behind my table in a toolbox that I picked up from Lowe’s. It is PERFECT. The top has 30 small drawers. I put letters inside of each. At the end of the week when I am planning groups for the next week, I have kids to put all the letters back and I can quickly place new letters in the cup as needed.

I have used a sheet for them to place their letters on and I’ve just allowed them to use the table. Both ways work well. The sheet gives them a place for their letters to stay. When it is time to build a word, they look at the available letters and move the letters that they need up to the line. I have some kids that love using this and some like to build their letters on the table. When they’ve built it, they can then write it. As they write it, I have them to either sound it out or say each letter as they are writing it. This helps them to hear what they are writing and to get in the habit of checking what they’ve done. You can find the letters and mats inside my Phonics at your fingertips set.

When I want my students to practice blending and putting word parts together, I usually sing a word hunt song. It came from an old reading series and just stuck in my head forever, so I still use it from time to time. It goes like this:

We’re going on a word hunt. What’s this word?’

Then, say a word that is already broken up, so I may say /b/ /e/ /d/. And then, they say “BED!” This is so easy. I usually do three to four words for each group and it takes less than 2 minutes. After they say the word, you can place down a picture to see if they got it right. Sometimes, I use my cvc cards from my Phonics set. You can find those here. 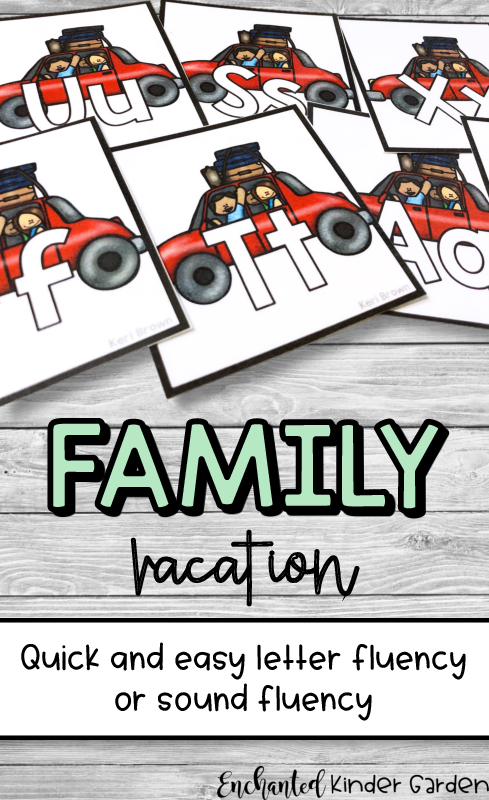 This is a favorite as well. I only started playing this game last year and it’s been a huge hit. The first time that we play, I tell a story about a family that’s headed to the beach. We have to help them get there very quickly by naming all of the letters (or sight words or rhyming words) and adding them to the suitcase. I time them for either a minute or less depending on how fast I want the game to go. We usually only play once. It helps to keep the game fresh for the next day or the next time that we play. It also keeps me on a schedule since I have a limited time with each of my groups. You can grab this free from The Garden.

SUPER SIMPLE. This is quite possibly one of my favorites since it is literally an under a minute and a half game and SO quick. I turn a deck of cards (they can literally have anything on them) facing me. I quickly either flip one around in the air or put it on the table. They have to call out whatever it is I’m asking for. For example, we may be working on ending sounds so I will want to hear only the ending sound. The person that makes the sound correctly and first, gets the card. I play this with rhyming words, beginning sounds, medial sounds, ending sounds, sight words, word families and SO much more. This is literally an endless type of game and they don’t get tired of it which is weird! I pull random cards for this, but have used my cards from my Phonics Set.

Rhyming seems to be one of the harder skills in reading that gets introduced so early in the year that I feel like they’re struggling. They’re really not. Rhyming is just a difficult skill to master. It takes kids the entire year sometimes before they’re ready. With that thought in mind, I have to make the time to practice it weekly. 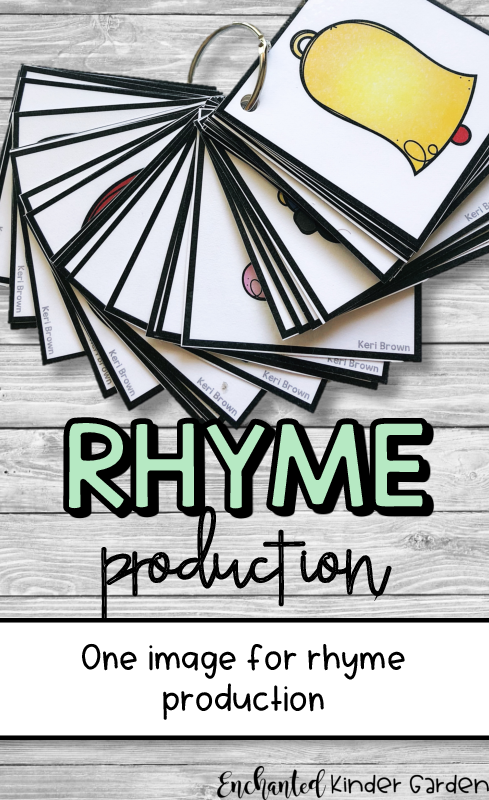 My Phonemic Awareness set includes two rings of pictures. One has a pair of pictures and the other only has one picture. I use these all the time for practicing rhyming in my small group. You can find that set here if you’re interested. If you have a reading series, I’m sure you have a set of picture cards that you can use.  I do tell them that the word they produce does not have to be a real word. I simply want them to understand that rhyming words have the same endings. As long as they can change the onset, I am happy with that. I pull a stack of cards out beforehand (during my small group planning time the week before) or I just flip through the ring which is WAY easier since I won’t have any real clean up time with this.

They repeat the word. I make them wait for three or four seconds and then I put down the card. After I put the card down, they know they can then call out a word that they think rhymes. I make them wait so they learn to think before they speak and also to give the ones that need more time to think about it more time. I listen to all of the responses and we quickly discuss whether each was a rhyme or not. This takes less than two minutes to get multiple cards done. It’s quick and you’ve practiced working on rhyming with each of your groups. If they don’t get it, I obviously stop the game and we discuss more in-depth about rhyming words. 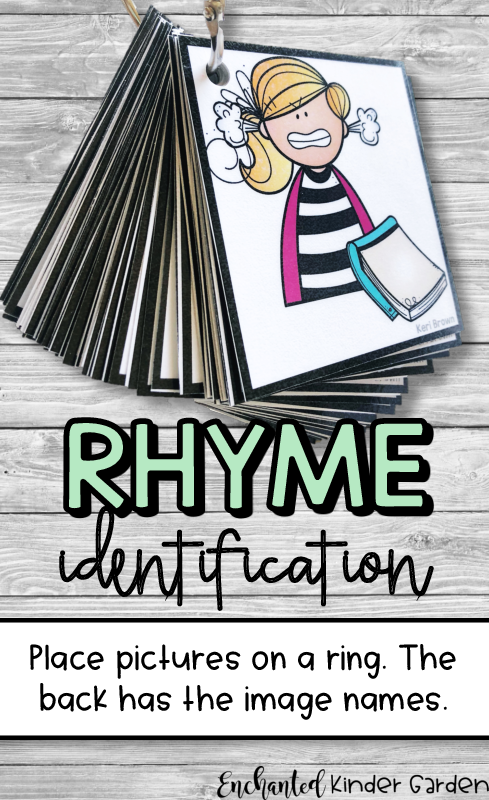 We love using the double picture rhyming cards.  These are HUGE timesavers for me because I hate having to turn cards around and look at the picture and then tell my kiddos the word. Now, I just hold the card up, read the words on the back and have them to say whether the pictures rhyme or now. Saves me so much time and it makes it a lot quicker.

This game requires nothing other than your finger and your kiddos’ ears. I say a word and they have to segment the sounds in the word on the table with taps.  So for example, if I said the word couch to them, they would tap 2 times and break the word couch into segmented parts. 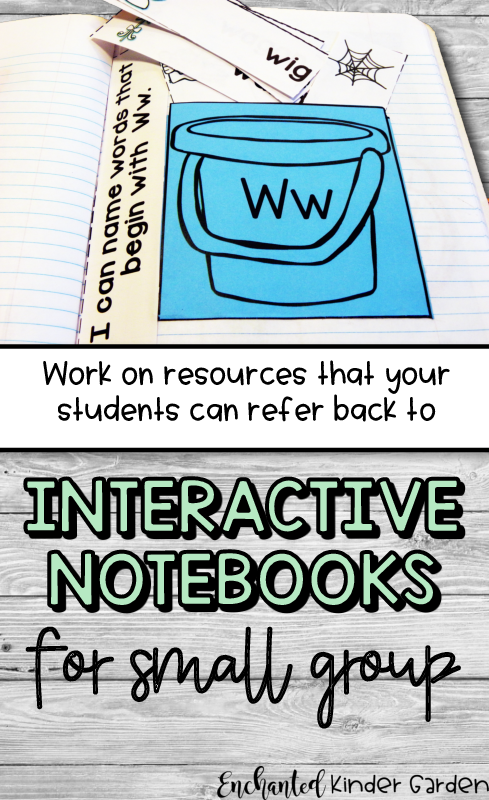 Once a week, I pick an activity for us to add to our interactive notebooks during small group. I usually choose one that may be a bit more difficult for them to do independently so we work on it together. Notebooking normally takes us about 5 or 6 minutes to get finished. I pre-cut for them to take that time back. This is the only time that I cut anything for them to add to their reading inb. Towards the beginning of the school year, we put in our alphabets to add to our notebook.

One of their favorites is the bucket of words. They are able to quickly look in their notebooks and identify words for each of the letters of the alphabet. It’s like having their own little word wall of words in their notebooks. The great thing is that every strip has a picture so they don’t have to ask me or a friend what the word is. I use the resources from my alphabet notebook.

Looking for more ideas to get your small group off to a great start? Check out how I plan my reading small groups.

by Keri
previous post: How to plan small groups and love it
next post: Sweetarts: Chicks, Ducks and Bunnies – Oh My! 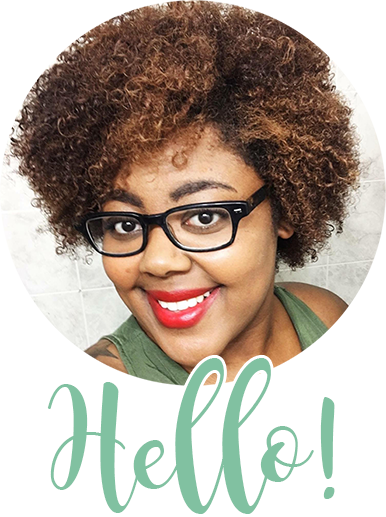 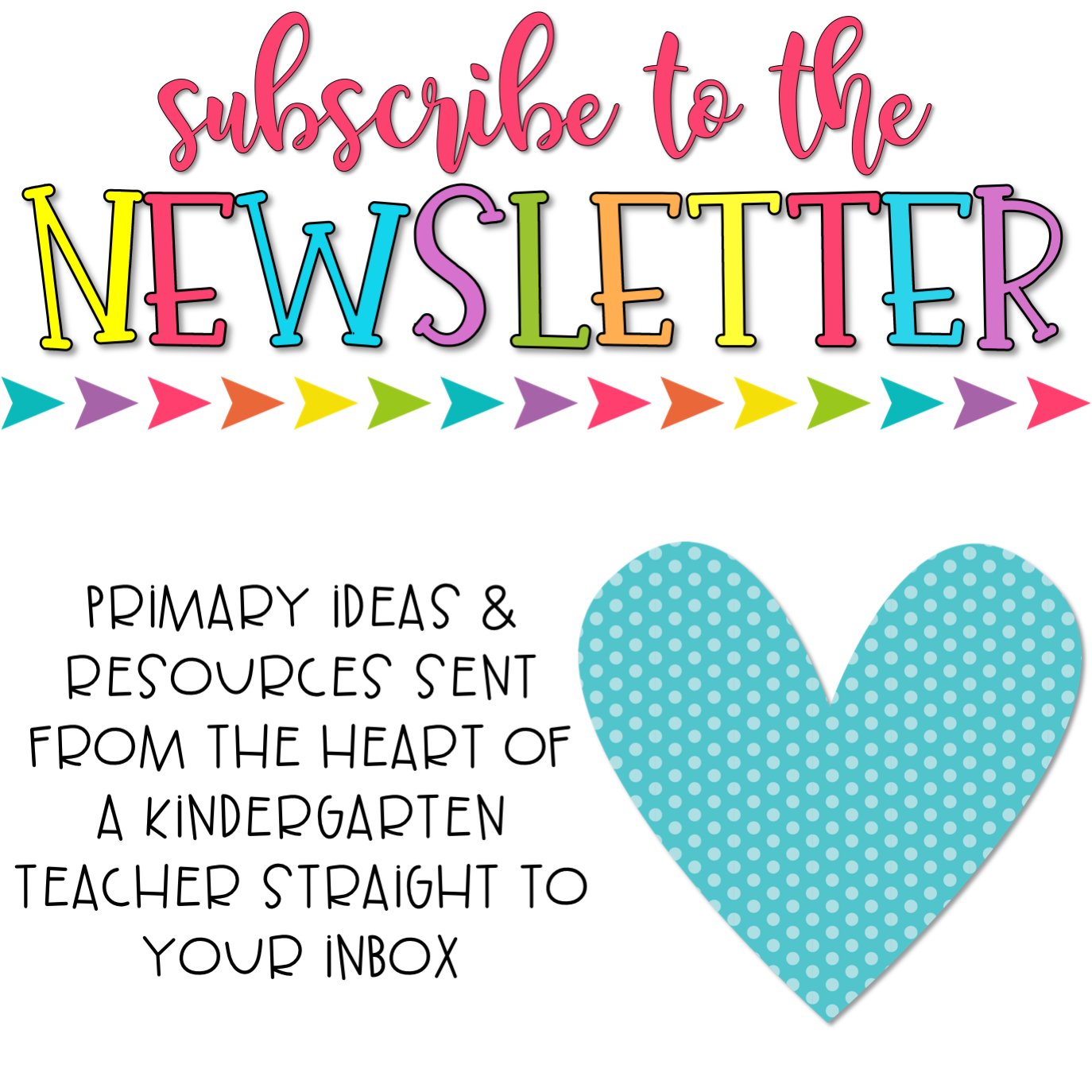